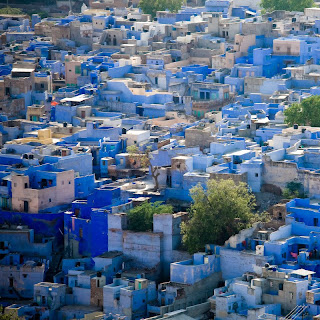 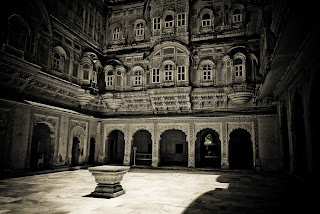 Jodhpur : [ The Blue City ]
Well in the past two years, it has been like an “All India Tour” sort of thing for me. Sitting in a hostel of a Management college in Jaipur, and listening to the songs in the BackGround of a B’Day party celebration, I find it best to write down about my two days experience in Rajasthan.[ espacially Jodhpur]
I may say it started with Siliguri in 2006 summers and it has been through Jamshedpur,Mumbai, ,Delhi,Bangalore-Mysore-Ooty-Goa,Kolkata,Kullu-Manali-Rohtang,Dehradun-Mussorrie-Tehri-Rishikesh,Allahabad,Darjeeling and now I am in Rajasthan.
The weekend knocked and I was in Jodhpur the next morning i.e. SaTuRdAy..Thanks to Dage [ Manish Daga / Dagya / Dage .. the names by which we call him....hehe ] for the invitation..The Day started with "mithaais" at Dagaz home.. a tradition of Jodhpur.. [ :):) ] ..yummy-yummy .... Next we were guided by Puneet [ Daga's brother ] to Ummed Palace and the Heritage.. the very view of the Ummed Heritage made us feel like being in the best part of this world..it was simply awesome.. [ :):) ].. Next was the MeharanGarh Fort.. built about 55o years back,counted among one of the safest forts.. It now stands testimony to the test of time..Still we can view the shots of the Cannon Balls on the walls of the fort..but this even was unable to breach the walls of this Magnificient Fort.... Amazing..!!..The view of Jodhpur from this Fort resulted in a great " Wow "..!!!! ..Simply Jodhpur can be referred as "The Blue City"..Then came the turn of the delicious sweets/namkeens of Jodhpur.. The taste of "Samose" and 'Mirchi Bada" is something that will remain for lifelong with me.. :):) ... Thanku Dage and Puneet..And one more thing .... U must have tasted differnet kinds of Gulaab-Jaamun but the Chuturbhuj Gulaab-Jaamun at Jodhpur is the especial of Jodhpur.. U won't get anywhere else..a. That was the best I had till now .... Though it is developed city but still I saw a lot many people in the Traditional costumes of Rajasthan..the women were having heavy ornaments and bright sarees borderd with golden tags..men wearing the traditional turban ..The roads at certain places gave the feel of Old Rajasthan.... :):) ..
Overall it was a memorable two-day tour which painetd a beautiful picture in my memory and a place where I would love to go again..... [ :):) ] .....
Tweet
Posted by Abhishek at 4:13 AM

great dude... seems u had an awesome time... two years past now u would be having gud enough knowledge to take us all on an all india tour as our guide...lolz chhora ganga kinare waala. wen r u coming back to vns??

hey..yeah I seriously had an awesome time.. enjoyed it to max in such a short span of time.. :):).. and yeah definitely I would love to guide you all to the different b'ful and amazning places of India ....
Well Banaras to aane ke liye betaab hain.... bas yahi betaabi kabhi bhi humein Banaras kheench sakti hai .... :):) ..Don't be surprised if u find me roaming at the Ghats of Assi..:):)..